In The Herbal Dose’s “Tree of Life Series,” which started earlier this month, we are observing the facts, stories, and medicinal and nutritional values of four trees from around the world deemed sacred by their longevity, resilience, and folklore: the Baobab in Africa, the Ginkgo in China, and the Bodhi in India, and the Lucuma in the South American Andes. They are among the world’s oldest trees and are revered by their people as the Tree of Life.

Next up: the Ginkgo tree, native to China. 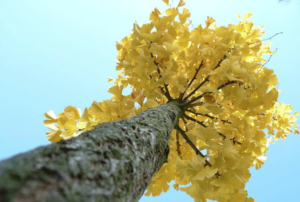 Ginkgo trees are primarily known for their elegant, fan-shaped leaves and many unique historical traits. They are the oldest species of tree on Earth. The ginkgo tree species is 270 million years old and considered a “living fossil” by botanists. They coexisted with dinosaurs! As a single species with no known living relatives, they are considered a peculiar botanical anomaly.

Ginkgo trees live for over 1000 years. The oldest living ginkgo trees grow in gardens outside temples and monasteries in China.

For modern medicine purposes, ginkgo biloba, also known as the maidenhair tree, is mostly cultivated for its nuts and leaves. The leaf is favored over the nuts for medicinal purposes, as it contains numerous healing properties and the raw nuts are toxic and a bit foul-smelling. All of ginkgo’s plant parts, including the root, are astringent, which is helpful when the health goal is to balance patterns of dampness. (I can identify such patterns in an herbal consultation.)

Ginkgo leaf increases circulation throughout the body, particularly to the head and brain. The leaf extract is an official medication in many countries. In fact, for several years, ginkgo leaf extract has been one of the most prescribed medications in Europe and one of the top-selling herbal supplements in the U.S. 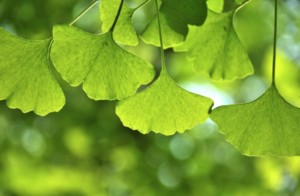 Ginkgo leaf is used most often medicinally as a cerebral circulatory stimulant. Some studies indicate that ginkgo may not prevent dementia or Alzheimer’s disease, as some believed previously, but rather it prevents the progression of the symptoms of dementia and Alzheimer’s disease. To this end, according to this article, the studies found ginkgo extract to be as effective as the approved Alzheimer’s drug, Donepezil (Aricept), but without the side effects. Additionally, in other trials ginkgo demonstrated effective treatment of PMS, anxiety, depression, other psychological disorders, and macular degeneration.

In my clinical herbal practice, the most common reasons I use ginkgo leaf for clients’ protocols and custom formulas is for memory, concentration, focus, and mental disorders. In an emotional and spiritual context, I like using ginkgo leaf to access a deeper connection between the heart and mind, build heart resiliency through difficult times, and support longevity and enlightenment practices.

Professional clinical herbalists consider the seed to have an affinity for the lung channel, heart channel, bladder channel, and kidney channel. Therefore, compounds from the seeds are used to treat respiratory illnesses including asthma, coughs, and allergies, skin conditions, cavities, and urinary tract infections.

In China, Korea, and Japan, ginkgo nuts were consumed as food. To reduce the toxicity in the raw nuts, the stinky coating is removed, and the remaining nut-like kernel is soaked and/or roasted. The ginkgo seeds are traditionally eaten plain or added to sweet and savory dishes such as porridge, soups, and stir-fries.

In East Asian cuisine, the nuts from the female tree are considered a culinary delicacy with healing properties and special traditions. To celebrate the New Year in Japanese culture, the nuts are added to a savory egg custard called chawanmushi. In Korea and China, the seeds are served at weddings for the aphrodisiac qualities and to wish the couple good health and fortune.

Throughout East Asia, in China and Japan in particular, the ginkgo tree is considered the Tree of Life. Within the early animistic belief system that informed Chinese philosophy, science, and religion, the ginkgo tree was revered as the natural embodiment of sacred life force energy.

Longevity and resilience are standard marks of any Tree of Life, and the ginkgo is perhaps the most renowned tree in the world in both aspects.

The tree does not attract any natural diseases or insect problems, which lends to its longevity. Besides that, ginkgo trees not only survived the Ice Age — in addition, they are the only plants that survived the atomic bombing of Hiroshima, Japan during World War II. Six ginkgo trees miraculously survived, despite being about 0.5-1.5 miles from the bomb’s epicenter. Their leaves grew the following spring, and the trees are still alive today.

If ginkgo trees survived the Ice Age, an atomic bomb, and the 1923 Great Kantō earthquake in Japan with a magnitude of 7.9, it seems silly to mention they also tolerate adverse conditions such as wind, pollution, fire, and lightning. Their survival through the world’s wildest conditions and catastrophes have earned them the ultimate plant resiliency badge. 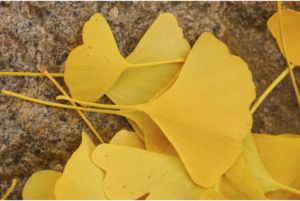 As a mysterious, ancient tree with evident longevity genes, the ginkgo became central to the practice of shamanic tree worship in China. Li Shizhen, the Ming dynasty author of China’s definitive materia medica, reported that Daoist shamans used to “engrave their magical spells and seals on old-growth ginkgo wood in order to communicate with the spirit world.”

The ginkgo tree and its iconic leaves are a global symbol of peace, hope, resilience, health, fertility, vitality, longevity, and enlightenment.

We are fortunate that many ginkgo trees grow locally, here in Omaha! 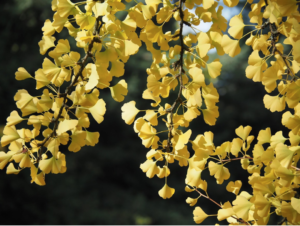 Please see all the references for this blog HERE.