In The Herbal Dose’s “Tree of Life Series,” we’ve been observing the facts, stories, and medicinal and nutritional values of four trees from around the world deemed sacred by their longevity, resilience, and folklore: the Baobab in Africa, the Ginkgo in China, the Bodhi in India, and the Lucuma in the South American Andes. They are among the world’s oldest trees and revered by their people as the Tree of Life.

Next up: the Bodhi tree, native to India. 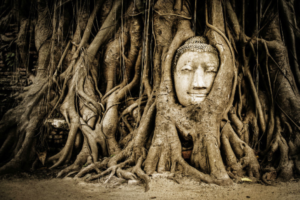 The Bodhi tree is known by several names, including banyan, pipal, peepal, pippala, and ashwattha. There are many fig species, but ficus religiosa, or the bodhi tree, is known as the sacred fig tree and Tree of Life throughout India and by different religions, particularly Buddhism, Hinduism, and Jainism. Peepals are slightly different from banyans, but both are used interchangeably in old texts.

In Sanskrit, the banyan is called the nyagrodha (“growing downwards”) or vata (“surrounded”) and bahupada, which means “many footed.” It grows in a hauntingly beautiful process, with its roots dropping down from the branches and then latching onto the ground. Mature trees do not typically have aerial roots. It is also called the “walking tree” because it grows steadily from its central trunk outward in a circular direction and self-generates new trunks, extending itself and taking up as much space as possible.

Gautama Buddha, the founder of Buddhism, was meditating under a bodhi tree when he attained spiritual enlightenment on the seventh day. Bodhi means “enlightened.” 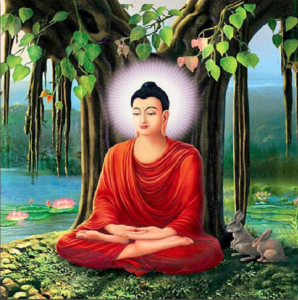 All parts of the banyan tree are used in Ayurvedic medicine. Banyan is most often used for open, bleeding skin sores and lesions. As an astringent and hemostatic, it helps stop bleeding. To heal wounds and abscesses the leaves are applied as a poultice topically. It is an analgesic and the tree sap contains anti-inflammatory properties, which makes it a helpful remedy for all types of arthritis and for reducing inflammation and pain in the body.

Banyan is effective for teeth, gums, and overall oral health – especially toothaches and bleeding gums. Chewing on the aerial roots or swishing and gargling an infusion of the leaves are the best ways to administer the plant for any oral-related treatment.

Various parts of the banyan tree are also used to heal kidney pain, bladder and urinary ailments, constipation, diarrhea and dysentery, male sexual dysfunction, irregular libido (especially for men), irregular menstruation, sexually transmitted diseases, and vaginal infections. In most cases, a tea or tincture of its different plant parts would be the most effective way to administer the medicine for these conditions.

For specific traditional tribal uses of the banyan tree, refer to this article.

The bodhi tree is central to countless historical and mythological events that dramatically shaped cultures and religions of the region.

The tree was woven into early judicial systems as a ritualistic measurement of honesty and justice. Community members on trial would crush the leaf before beginning a testimony, place the leaf on one’s head or hold it in their hand while testifying, or stand beneath the tree while taking an oath, and step on burning pipal leaves or wood to determine guilt (if wounded) or innocence (if unhurt) – giving life to the phrase “trial by fire.”

Traditionally, married women worshipped the tree to promote longevity for their husbands so as to not become widows.

The pipal tree is thought to be where ghosts abide. A tantric text warns that one should never use pipal wood for cooking a fire because ghosts reside in the pipal tree. The spirits of Brahmin boys (a high caste from which priests are chosen) who died before they were married are considered to live in pipal trees. Thus, many believe the spirits of these trees can make women fertile with virtuous sons. Many rituals involving the pipal tree were developed to help the unsettled spirits find peace in their souls. 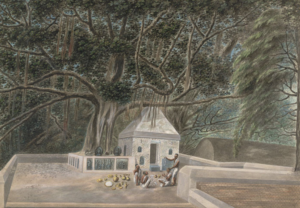 The bodhi tree maintains all the regular standards of a sacred Tree of Life, including its longevity, resilience, and extensive shelter and cultural significance for its people. In addition, it is renowned for producing oxygen for 24 hours a day (due to its crassulacean acid metabolism (CAM)) and for its self-sustaining ability to create new trunks. When Queen Tissarakkhā grew jealous of the original bodhi tree, to which Emperor Ashoka devoted more attention, celebration, and adoration than toward her, she destroyed the tree with mandu thorns. But the tree grew back.

Years later, the original bodhi tree was destroyed during war — all except the southern branch. The bough was preserved and brought to Sri Lanka by the famous Indian Buddhist nun, Saṅghamittā, eldest daughter of Emperor Ashoka. The branch was planted in Anuradhapura, Sri Lanka and is now known as Jaya Sri Maha Bodhi. It stands over 2,300 years old and is the oldest human-planted tree in the world with a known planting date. 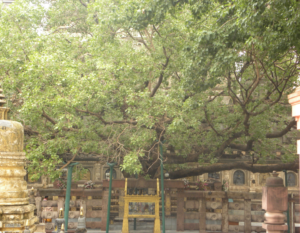 Please see all references for this blog HERE.