Many early civilizations believed all living beings originate from a majestic, magical tree known as the Tree of Life. Let’s observe the facts, stories, and medicinal and nutritional values of four trees from around the world deemed sacred by their longevity, resilience, and folklore: the Baobab in Africa, the Ginkgo in China, the Bodhi in India, and the Lucuma in the South American Andes. They are among the world’s oldest trees and revered by their people as the Tree of Life.

We will feature one tree per article over the next several weeks – our “Tree of Life Series.”

This series is divinely timed with the recent addition of Omaha Integrative Care’s own custom-made crystal “Tree of Life” wall art, handcrafted by Heartland Serenity and now gracing our lobby. (scroll to end for photos)

First up for The Herbal Dose “Tree of Life Series”: the Baobab tree, native to Africa. 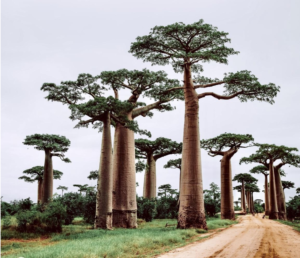 Baobab trees grow in over 60% of Africa’s countries and live for up to 2,500-5,000 years. DNA testing proves the baobab originated in West Africa. The tree predates humankind, existing even before the supercontinent Pangea divided into separate landmasses.

It is regarded as the largest succulent plant in the world. It is renowned for carrying large volumes of water in its trunk, which averages 23-36 feet in diameter. This West African proverb says it all: “Wisdom is like a baobab tree; no one can embrace it.”

Currently, baobab is most commonly used globally as an oil, in botanical cosmetics, and as a nutritional powder.

As an oil, the scent is mildly nutty with subtle floral notes. It can be used topically on the body, including the face and hair, or for cooking. Baobab seed oil is rich in vitamins, minerals, and essential and other fatty acids, containing vitamins A, C, D, E, F and Omega 3 and 6. When applied externally, it is effective for dry, coarse skin and hair and chronic dry, inflamed skin conditions. Studies indicate that topical application of baobab seed can promote skin cell regeneration and tone, tighten, and moisturize the skin. Baobab is one of the lightest carrier oils and absorbs easily into the skin, making it a safer consideration for applying to sensitive skin and the face.

In 2008, baobab fruit was approved for the European market by EU food regulators. Since then it has gained increasing market and media exposure. The fruit and powder experienced a sharp rise in sales in the UK in 2018 as a popular breakfast food – adding the powder to porridge, oatmeal, and smoothies or consuming it as a fruit. Other common uses since its expansion outside of Africa include baobab-infused gin, beauty products, and yogurt.

Baobab fruit tastes like tart citrus with notes of vanilla. It is considered a superfruit, with its high amount of antioxidants, vitamin C and B6, calcium, niacin, iron, potassium, fiber, and phosphorus. 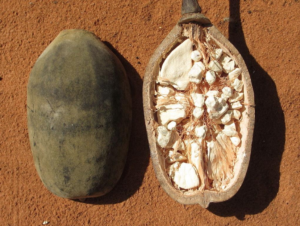 In Africa the fruit is presenting valuable artisanal business opportunities, including the local production and sales of baobab jam, juice, and wine. My first encounter with baobab was in Cape Coast, Ghana, where I used to live. A German humanitarian created a vegetarian restaurant called Baobab House, which I frequented for their refreshing smoothies featuring baobab and moringa. In the spirit of honoring delicious baobab drinks across West Africa, here’s a recipe for “bouye,” a widely acclaimed traditional Senegalese shake:

Baobab leaves, rich in iron, are consumed as a vegetable throughout West Africa but not the rest of the continent. It is added to soups, stews, sauces, relishes, and condiments. Sometimes the leaves are steamed and eaten as a side dish, similar to spinach but with at least twice as much calcium.

As a traditional African medicine, baobab has many uses. These are the most common traditional healing uses of baobab, organized by plant part:

**Applications and dosing are different for each plant part, health condition, and person.

Some of the traditional medicinal uses of baobab by African country:

**Applications and dosing are different for each plant part, health condition, and person.

According to research in this article by the American Botanical Council in 2015, baobab has the following biological properties: anticancer, antisickling, hepatoprotective, antiviral, antibiotic, anti-inflammatory, antipyretic, analgesic, and antioxidant.

The baobab is regarded as the Tree of Life for its multiple ways of supporting human existence, its resilience, and its longevity and ancient roots that reach back to our earliest origins as humans.

Every part of the baobab tree is used to sustain human life. In addition to its hundreds of nutritional and medicinal applications, other parts of the tree are used as various raw materials and supplies, including cloth, roofing, rope, fishnets, boats, and soap. The trunks are hollowed out to create shelter for homes, schools, bus stops, shops, prisons, pubs, and more, grain storage, and water reservoirs. In some African traditions, the hollowed trunks become temporary abodes for important human transitions, including for beginning of life or end of life transitions – births, funerals, and burials. I presume this sheltering practice would also apply for tribe members who are extremely ill (in body, mind, or spirit), but I haven’t found the research to support that yet.

Research indicates close associations exist between early human settlements and the baobab in Africa, and the tree is linked to human dispersal and settlement patterns.

The baobab’s resilience has proven it a reliable source of nourishment for humans and animals. A mature tree can fully recover from fire, girdling or “ring barking,” and root removal, any of which would kill most other trees. It also manages to withstand the damage caused by elephants, such as debarking and debranching. Baobab has the unique ability to regenerate its bark if removed. In fact, quite remarkably, it regenerates the whole “wound” or stripped bark at the same time – not needing to regenerate from the outside of the wound to the inside as other trees do. My theory is that this biological attribute of self-healing its own wounds is one of the reasons baobab is an effective medicine for healing open wounds in humans – and likely animals too.

Africa’s Tree of Life has an abundance of cultural beliefs surrounding its life-giving qualities and links to longevity.

In the Limpopo Province of South Africa, some believe that when a young boy is washed in the water of decocted baobab bark, he will grow up into a big man.

Some Africans believe that women living in a traditional village with many baobabs will have more children because they’ll eat soup made from nutritious baobab leaves to increase fertility.

The women of the Hadza tribe in northwest Tanzania give birth inside a hollow baobab tree. In this video of Ray Mears, one Hadza woman said she stayed inside the baobab tree for a month after each of her kids were born until the umbilical cord fell off. Another Hadza woman in the video thinks their tribe will die if this tradition dies.

In many African cultures, the baobab represents ancient settlements and ancestors. Some cultures believe the baobab is where the spirits of their ancestors dwell; therefore, the tree serves their community as a ceremonial altar for rituals and sacrifice. Around the largest, oldest, or most central baobab of a village, one may see altar offerings such as animal skulls, wooden fetishes, and harvested crops at the foot of the tree or tied to the trunk.

Wherever the baobab tree resides, it is protected, honored, and surrounded by myth and mystery.

Please see all the references for this blog HERE.