The Herbal Dose: Natural Stimulant Herbs – South of the Border

In The Herbal Dose, we are starting a new series of blog posts featuring medicinal herbs from around the world. In this first post of the series, the spotlight is on mild stimulant herbs from South America and Central America.

These three bitter herbs offer an even, zen-like energy without the sudden crash or jitters that coffee gives. The unifying compound in all three of these herbs is theobromine, which means “food of the gods” in Greek. Theobromine is a bitter alkaloid compound which is a cardiovascular stimulant, a diuretic, and a vasodilator, meaning it opens the blood vessels and increases blood flow.

Let’s first talk about my two current favorite medicinal teas from South America that I’ve been brewing lately for a natural energy boost in the mornings. 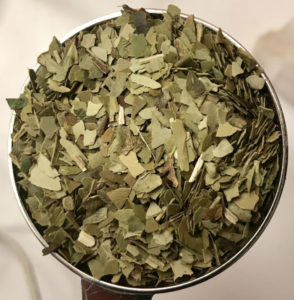 Yerba mate is the traditional drink of the Guaraní people of Paraguay, Uruguay, southern Brazil, and northeast Argentina. They believe it cleanses the spirit as well as heals it. It is served in a hollow gourd with a bombilla, or straw, that filters the yerba mate leaves. Yerba mate is a nutritious source of energy and increases mental acuity. There are 196 active compounds in yerba mate, which is more than green tea, including antioxidants, vitamins, and minerals. It has many health benefits, such as reducing high blood pressure and cholesterol, reducing inflammation, reducing body fat, acting as an antibacterial agent, and more.

The flavor profile of yerba mate is robust, earthy, bitter, and smoky. Its caffeine level is higher than guayasa but lower than coffee and lasts longer without the side effects. 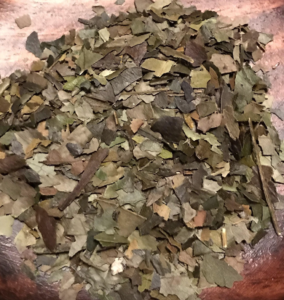 Guayusa is a natural stimulant native to the upper Amazon Jungle regions of Ecuador, Peru, and southern Colombia. It is traditionally consumed in the mornings as part of rituals and ceremonies for village shamans to interpret community members’ dreams, as well as for its long-lasting energy boost. Guayusa is uplifting, enhances focus, and filled with antioxidants. The caffeine in guayasa heightens awareness, while its L-theanine compound induces calm.

The next stop around the world is in Central America. Instead of steeping this next medicinal plant as a tea, I brew it as a warm, thicker, water-based liquid with added native spices and honey, as it was traditionally prepared. I use this plant medicine for personal healing purposes and when facilitating group healing ceremonies; therefore, I prepare it ceremoniously, in a meditative state, and set intentions before consuming it. 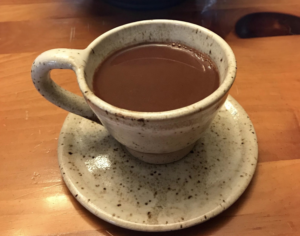 Raw cacao is the pure origin of what we know as chocolate. The fruit of the cacao tree contains beans from which the cacao is extracted and chocolate is made – with many additional ingredients. Cacao is native to Central and South America and has a rich 4,000-year history. The beans were once used as currency. The Mayans worshipped the cacao goddess and reserved chocolate for rulers, warriors, priests, and nobles. Over time, cacao has served as food and beverage, health elixir and spiritual elixir, sacred healing medicine, and potent aphrodisiac.

Cacao is a heart-opening plant. Its active constituents directly affect the heart. It is a cardiovascular stimulant, it improves the mood, and as a superfood, it is abundant with antioxidants, vitamins, minerals, and other healthy and anti-aging benefits. Four notable scientifically proven “bliss” chemicals in cacao include serotonin, tryptophan, phenethylamine, and anandamide. These neurotransmitters help relieve stress and depression, regulate the mood, and increase feelings of happiness and wellbeing. Cacao increases the heart rate also reduces blood pressure if it’s high. If you are on blood thinners, have a serious heart condition, or are taking certain anti-depressants (MAOIs or SSRIs), I advise to not consume cacao as herbal medicine.